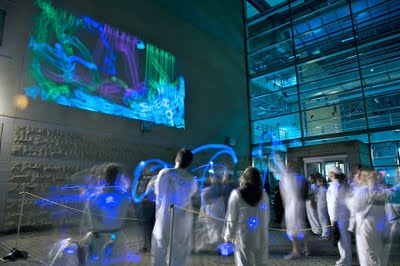 Toronto Nuit Blanche was a blast. For those of you who don’t know:

Nuit Blanche (literally White Night or All-Nighter in French) is an annual all-night arts festival. Its exact beginning is disputed between Paris, St Petersburg, and Berlin, but, taking elements from all of these, the idea of a night-time festival of the arts has spread around the world since 1997, taking hold from Montreal to Madrid and Lima to Leeds. A Nuit Blanche will typically have museums, private and public art galleries, and other cultural institutions open and free of charge, with the centre of the city itself being turned into a de facto art gallery, providing space for art installations, performances (music, film, dance, performance art), themed social gatherings, and other activities.

This year the local Toronto Artist and Ryerson Image Arts Student, Mike Lawrie and I have entered a Independent project — Multitorch — under the Ryerson University/Faculty of Communications And Design’s Lightup the Night. The project involves a 23’x13′ (26′ diagonal) projection weighing in at 4096×2048 pixels driven by a multitouch engine. Up to 10 Infrared LED torches are handed out to the audience and the system will allow them to interact with the projection in front of them. As far as we know this is the largest (and highest resolution) multitouch screen deployed to date. The project uses CCV (Community Core Vision) tool for tracking, OSC (Open Sound Control) for communication and a 4500 line custom java visual engine. Here is a short 5:00 minute Timelapse video.

One thought on “Nuit Blanche: Multitorch”