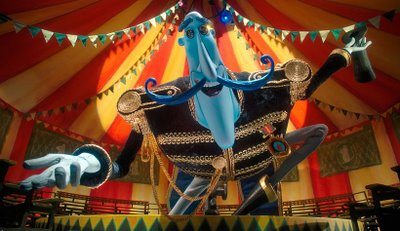 CG Society has a great detailed article on the tech that went into creating the new 3D animated movie, Coraline . For those of you who don’t know fabbing — the technique used in creating the characters for this movie — is the process of 3D printing . The article explains the use of 3D scanning and printing in the new Neal Gaiman/Henry Selick movie about a little girl who finds a secret door to an “Other World”.

The first stop motion filmed in stereoscopic 3D (S-3D) during production, Selick wanted to tackle an even bigger accomplishment: creating a true stop motion film with the smooth facial transitions of CG animation in a hands-on medium.

The answer to this quest was to use replacement animation, where one stop motion puppet face is progressively swapped for another slightly different expression with the needed smile, frown, or appropriate eyebrow position. This method is not new, but the effect is a bit choppy- often desirable for a hand made look, but has never before had all the in-betweens that Selick wanted. However, sculpting those thousands of expressions by hand would have taken years to complete. To keep the budget and timeline intact while creating stop motion animation so smooth you could read Coraline’s lips, production studio Laika creating blend shape CG face models that were output through rapid prototyping (RP).