Let me first state that this has been tried in my environment and it works. It might NOT work for you. Try it first and make sure your backups are clean and good. I have a OSX server (10.5.5 as of this writing) that needed to be backed up and am using a QNAP TS-409 PRO as my backup location. The QNAS has a AFP/SMB share called “Backup” where I keep all my backups. The server is configured with 2x80GB drives in raid-1 mode (mirror). Here is how I did it (again your milage may vary):

1) First we need to find out the MAC address of your server. I’m using one of the two ethernet ports on the server (en0) so I just open up a terminal window and type ifconfig en0 to get the MAC address. You’ll see something like this:saturn:~ mayromlo$ ifconfig en0
en0: flags=8863
The line we’re interested in is the one starting with ether (line 5). Take down that number without the colons (ie: 0019e3e82f02 in my case).

2) Mount the AFP share on to your server. Mine is called Backup. 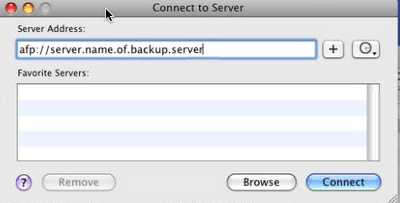 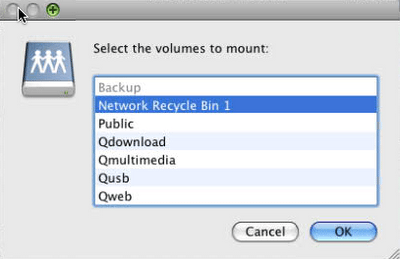 3) In a terminal window change your current directory to the AFP share (eg: Backup) and create a empty file called .MACaddressnumber, where MACaddressnumber is the number we jotted down under 1). saturn:~ mayromlo$ cd /Volumes/Backup
saturn:Backup mayromlo$ touch .0019e3e82f02This hidden file is needed for every machine you want to Time Machine into your NAS. I’m backing up also workstations so I’ve got a couple of these hidden files.

4) Next we need to create a reasonably sized Sparsebundle file. This is where the actual backup gets done. The Sparsebundle doesn’t take a lot of space initially and grows as more files need to be backed up. For example I created a 80GB Sparsebundle file that was only 8MB large in reality, but grew to 20GB when I did the first backup. We need to create the Sparsebundle file on the local OSX machine (eg: OSX server in my case). Again this is important, Create the sparsebundle on a local OSX machine  NOT the network share. So open up a terminal and type the following to create the initial file: hdiutil create -size 80g -ov -fs HFS+J -type SPARSEBUNDLE -volname "Backup of Saturn" Saturn_0019e3e82f02.sparsebundleSo in the above example we have

Make sure you get the filename proper or else nothing will work. Now transfer the sparsebundle file to your AFP share (eg: Backup in my case).

5) On the server issue the following command to enable Time Machine for Networked drives:defaults write com.apple.systempreferences TMShowUnsupportedNetworkVolumes 1
6) On the server in Finder goto Preferences and make sure “Connected Servers” is checked under “Show these items on the Desktop“.

7) Open up the Time Machine Preference panel and select the AFP share as your disk. Enjoy and please remember YOU ARE RESPONSIBLE FOR BACKUP INTEGRITY, SO CHECK YOUR BACKUPS TO MAKE SURE THEY ARE GOOD.